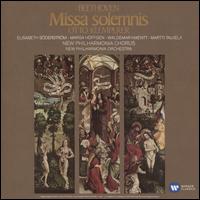 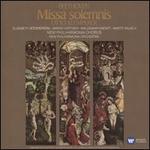 This recording by Otto Klemperer (1885 - 1973)and the New Philharmonia Orchestra and Chorus dates from 1965. The soloists are Elisabeth Soderstrom, soprano, Marga Hoffgen, contralto, Waldmemar Kmentt, tenor, and Martti Talvela, bass. The recording was instantly accepted as a classic, and it remains so today.

Beethoven composed the Missa Solemnis near the end of his life, and the work represents, as many critics have noted, Beethoven's attempt "to come to terms with God". (Lewis Lockwood, "Beethoven: the Music and the Life, p. 405) Although born a Catholic, Beethoven was not a regular churchgoer. As he became older, Beethoven became increasingly preoccupied with spiritual concerns. He was familiar with and drawn to the work of liberal theologians of his day who stressed the personal, inner, and seeking character of religious life over adherence to dogma and ritual. (Lockwood, p. 403)

The highly personal character of Beethoven's religious search, as expressed in his Missa Solemnis, might make the work particularly appealing to listeners today who are skeptical of particular creeds and of organized religious institutions. Otto Klemperer was himself a lifelong seeker in terms of religion. Born a Jew, he converted to Roman Catholicism only to return again to Judaism late in his life. The difficulties of the Missa Solemnis -- in terms of the wide disparity of style and tone among its movements, its use of archaic modalities and musical forms, its contrasts of lyricism and fury, might be explained by remembering the personal character of the work and its place in Beethoven's own religious search.

Klemperer's recording of the Missa Solemnis is epic in character and possessed of a craggy grandeur. He captures the religious, highly idiosyncratic character of Beethoven's score and wields the work into a unity. The chorus and the soloists sing with passionate intensity.

The Missa Solemnis is in five movements. It begins with a solemn orchestral introduction to the opening solem Kyrie. The middle movements, the Gloria and the Credo, feature passionate and fiery opening sections and lengthy fugues for their conclusions. The fourth movement, a Sanctus, has lovely, florid passages for solo violin which accompany in turn the soloists and the chorus. The final movement, Agnus Dei, involves a musical contrast between a march and warlike theme in the orchestra and moments of transcendent peace at the conclusion. Beethoven marked this final movement as a "Prayer for Inner and Outer Peace." (Bitte um innern und aussern Frieden.)

Many listeners and critics have difficulty with the Missa Solemnis. It has been described as "Beethoven's least approachable work." (William Drabkin, Beethoven's Missa Solemnis, p. 1) As I noted, the difficulties are largely due to the wide variety of musical styles that Beethoven utilized in this composition and to the difficulty of integrating these difficult, diverse styles into a coherent whole. Klemperer's reading on this disc brings out the character of each movement of this other-worldly music.

In his biography of Beethoven mentioned above, Lewis Lockwood wrote (p.411) that the Missa Solemnis was Beethoven's "largest contribution to the expression of the spiritual, in the various senses of the term, [and] is also a symbolic representation of humanity's search for peace that can only be discovered through religious feeling, collectively and personally." Both Klemperer's classic recording and Schermerhorn's recent recording will help the listener approach this work. The Missa Solemnis is a music for many times and places. Each new version will carry something of Beethoven's message to the receptive listener.