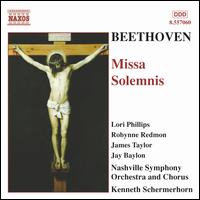 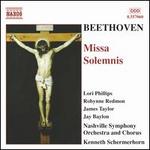 I have always taken an interest in the career of conductor Kenneth Schermerhorn of the Nashville Symphony Orchestra. Schermerhorn became the conductor of the Milwaukee Symphony Orchestra at about the time I was leaving Milwaukee and turned it into a first-rate ensemble. The Milwaukee Symphony was my first and for a long time only source of professional, live orchestral music as I developed as a child what would become a lifelong passion for music. Schermerhorn has proceeded to make some outstanding releases of American orchestral music with the Nashville Symphony on Naxos. With this CD, he conducts one of music's seminal works: Beethoven's Missa Solemnis, opus 123. The music is performed anew by a rising American conductor,orchestra, and chorus with four young American soloists: soprano Lori Phillips, mezzo-soprano Robynne Redmon, tenor James Taylor, and bass Jay Baylon.

The Missa Solemnis is a rare work in that it combines on a vast scale music of a subjective, deeply personal intimacy with an extraordinary showing of musical study and learning.

The personal character of the work can be shown by two famous markings Beethoven put at key points in the score. The Mass was dedicated to the Archduke Rudolf, Beethoven's longtime patron. On the Archduke's copy of the score at the head of the opening Kyrie Beethoven wrote "Von Herzen -- mogen es wieder -- Zu Herzen gehen!" -- From the heart, may it go to the heart! Then, Beethoven wrote an inscription on the final section of the Mass which read: "Bitte um innern and aussern Frieden" -- Prayer for inner and outer peace. This last phrase captures much of the essence of the Missa Solemnis as Beethoven tried to come to terms with the difficulties of his own life and write spiritual music for himself and for generations of listeners.

The learned character of the Missa Solemnis is shown by the variety and difficulty of the musical forms Beethoven utilized in his work. The Missa Solemnis shows that Beethoven had made an extensive study of music and of the mass dating back to the time of Palestrina. The work shows an exhaustive study of fugue and of counterpoint and of ancient musical modes. I think the chief musical influence on Beethoven in the work was that of Handel, but many scholars think Beethoven studied Bach's B-minor mass as well. Learned counterpoint abounds in this work, particularly in the second and third sections, the Gloria and the Credo and in the "Osanna" of the fourth section, the Sanctus.

The work contrasts some serene, meditative music for chorus,soloists and orchestra, such as the opening Kyrie with the fiery passion of the Gloria and the Credo. The Sanctus features beautiful solo playing by the first violin, here performed by concertmaster Mary Kathryn Van Osdale together with the chorus. The final movement is a lengthy vision of spiritual peace, with moving interactions between the orchestra and chorus.

The Missa Solemnis is a notoriously difficult work to sing and does not always fare well in performance. It is hard to make the very different musical forms and textures that Beethoven used in this work cohere together as a unit. For some listeners, the Missa Solemnis remains a forbidding work, and for many listeners it will require patience and several hearings to appreciate this music. Schermerhorn's performance here succeeds in capturing the unity of this work, with an emphasis on its lyrical and radiant character.

It is a joy to have this music performed by an Orchestra in American's heartland for a new generation of listeners. From the heart, may this music go to the heart.