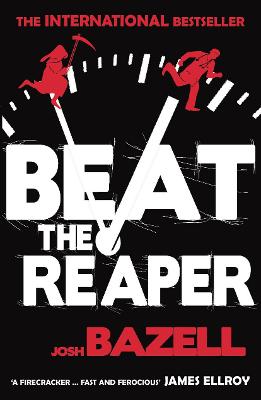 He's a doctor with a past...He's a hit man with a conscience...And he's got 24 hours to beat the reaper. Meet Peter Brown, a young Manhattan hospital intern with an unusual past that is just about to catch up with him. His morning begins with the quick disarming of a would-be mugger, followed by the steamy elevator encounter with a young female pharmaceutical rep, topped off by a visit with a new patient - and from there Peter's day is going to get a whole lot worse and a whole lot weirder. Because that patient knows Peter ... Read More

He's a doctor with a past...He's a hit man with a conscience...And he's got 24 hours to beat the reaper. Meet Peter Brown, a young Manhattan hospital intern with an unusual past that is just about to catch up with him. His morning begins with the quick disarming of a would-be mugger, followed by the steamy elevator encounter with a young female pharmaceutical rep, topped off by a visit with a new patient - and from there Peter's day is going to get a whole lot worse and a whole lot weirder. Because that patient knows Peter from his other life, when he had a different name and a very different job. The only reason he's a doctor now is thanks to the Witness Protection Program - and even that can't protect him from the long reach of the New Jersey Mob. Now he's got to buy some time to do whatever it takes to keep his patient - and himself - alive. "Beat the Reaper" is an intensely clever, imaginative novel that thrills on every page and is one of the most audacious and outrageous debuts of the year. Read Less

All Editions of Beat the Reaper

The Manual of Detection

Dr. Peter Brown, an intern in a Manhattan Hospital has a past that he'd rather keep hidden, that is if he wants to live. When a man from his past recognizes him as "BearClaw" a former hitman for the mob turned witness, Peter must do everything he can to keep who he really is from getting back to some of the people in his past.

Unveiling the story of Pietro "Bearclaw" Brnwa, interwoven with the craziness of a day with Peter Brown making rounds in the hospital; You have sheer writing genius. This book is vulgar, violent and in your face aggressive and all at the same time it's the most unique and refreshing story I've read in a long time, with an Anti-hero you can't help but like. This is a roller coaster ride like no other, with never-ending violence and action.

The final fight scene in this book is so crazy and amazing that it makes you wonder how someone could come up with a scene like this, and many other scenes in the book for that matter. What kind of person is Josh Bazell, the mind behind such violence and grand imagination? He has to be the most interesting person, with a tortured mind I suspect. Would I want to be his friend if I met him? HELL YES!

This is his debut novel, but when his next comes out I will be the first in line to buy it.

Josh Bazell, the author of Beat the Reaper, is a medical resident at UC San Francisco. His hero, Peter Brown, nee Pietro Brnwa, aka the Bearclaw, is also a medical resident, at the fictional Manhattan Catholic Hospital. There, one would hope, the similarities end.

Pete Brown is not a very good doctor--he downs many pills, of various sorts, as if they were candy; he very loosely interprets the credo "First do no harm," putting his own personal emphasis on the word "first" while sometimes ignoring "do no harm;" and then there's his past as an off-the-books hitman for the mafia. But that's not to say that he doesn't know some stuff...if only he could get his own stuff together.

As Beat the Reaper opens, Pete is beating up and disarming a would-be mugger who has interrupted the rat vs. pigeon fight he's stopped to watch on his way to work. No, really. The first person narrative plunges us immediately into the action, which follows present events and flashes back to fill in the rest of the story, which is a doozy.

We learn that Pete was raised by his grandparents, holocaust survivors who were murdered when he was 14. His quest to learn why these mild, good people were murdered causes him to insinuate himself into a world which, while it's completely alien to his upbringing, he takes to as naturally as breathing.

He commits his first killing--a revenge killing--before he reaches his majority, and his first paid hit not long after that. He's in WITSEC (the Federal Witness Protection Program) by 22. He's lost the love of his life and killed his best friend before 25.

Pete's voice is smart-alecky. He's a self-deprecating know-it-all, whose narrative is complete with footnotes which are both informative and hilarious. The action is non-stop and very violent, and the novel works both as a stand alone or, potentially, as the first in a series.

It is certainly evident that Mr. Bazell knows his anatomy and physiology, but if I had wanted to know all the details (as elaborated in endless and distracting footnotes) I would have read a medical text book instead. The action is outlined crisply and keeps you moving on, but the plot(s) leave one with the question: Is it creditable fiction or is it science fiction?
If and when you do read the book, please get to the end which describes the most outlandish and unbelievable wrap-up solution I have ever read!

Please, Mr. Bazell, do not give up your day job.