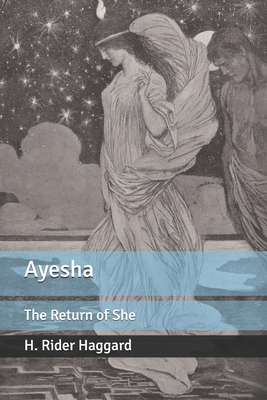 Ayesha: The Return of She

A thrilling drama of mystery and immortal love, this suspenseful sequel to She chronicles the adventures of two explorers in search of a spirit of Nature incarnate. 47 illustrations. Read More

A thrilling drama of mystery and immortal love, this suspenseful sequel to She chronicles the adventures of two explorers in search of a spirit of Nature incarnate. 47 illustrations. Read Less

All Editions of Ayesha: The Return of She

The People of the Mist

The People of the Mist

Haggard's SHE picks up again, this time written in 1925 and a sequel to SHE as her reincarnated love once again with his older friend and guardian Holly along, cross every imaginable danger imaginable to hopefully find their immortal Goddess again. Is this legendary female really Ayesha, the immortal (kinda, sorta) who met her fate in SHE? Will an encounter along the way be their undoing? Will savages, killer hounds or landslides, avalanches or starvation keep these 19th century heroes from their quest? If this is Ayesha, what can happen to them all this ime around, and how does a mortal man approach loving something more supernatural than flesh? Brilliantly written by Haggard in the flowery language of the day (circa 1900), AYESHA packs all of its pulp power into an epic that stands side-by-side with the original SHE, which sold over 83 million copies since its 1st edition. EVERY element of Haggard's tales have been lifted since then, from Anne Rice to Indiana Jones and beyond, but here, it is pure and richly visualized.

This is a timeless masterpiece of pulp writing and a can't-put-it-down book, even a century later. With a century-plus cult-like following, SHE is both great reading and a bold feminist statement against victorian England when it was published.

for a last blast of irony, SHE AND ALLEN teams She (Ursula Andress in the 1967 film version) with Allen Quartermaine (Sean Connery in League of Extraordinary Gentlemen): both film icons who appeared in the first James Bond adventure, Dr. No. Ponder that while you chew up AYESHA and dive into the remaining SHE stories.