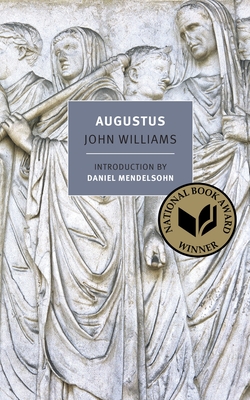 Just eighteen when his uncle, Julius Caesar, is murdered, Octavius Caesar prematurely inherits rule of the Roman Republic and must work against the powerful Roman political machinations to claim his destiny as first Roman emperor. Read More

Just eighteen when his uncle, Julius Caesar, is murdered, Octavius Caesar prematurely inherits rule of the Roman Republic and must work against the powerful Roman political machinations to claim his destiny as first Roman emperor. Read Less

All Editions of Augustus

Imperium: A Novel of Ancient Rome

The American writer John Williams (1922 -- 1994) wrote only three novels in his adult life, but each is a masterpiece. His first novel "Butcher's Crossing" is a Western with elements of both "Moby-Dick" and Emerson. His second novel, "Stoner", set in academia, was a failure when published but received belated recognition to become Williams' best-known work. Williams received the 1973 National Book Award for his final novel, "Augustus", a historical novel set in the early days of the Roman Empire. I read "Augustus" after reading the earlier two novels. The setting in antiquity may make the book seem forbidding, but it is well worth the effort. The book is dense but splendid. The historical background for the novel will be generally familiar to those who have read Shakespeare's "Julius Caesar" and "Antony and Cleopatra."

The novel is told through letters as well as memorandums, journal entries, and other writings of the protagonists, most of whom are historical figures. The epistolatory form allows the characters to speak in their own voices and to offer multiple points of views of the characters and events in the story. The entries in the book are not entirely chronological but frequently shift in time to illuminate events. The book follows the personal and political life of Octavius (63 B.C. -- 14 AD) from his youth to the end of his life. Octavius was the nephew of Julius Caesar who adopted him as a son. With Caesar's assassination, Octavius as a lad of 19 came to Rome and gradually prevailed after long struggles for power to become the first Emperor of Rome, receiving the honorific title of Augustus. I refer to the protagonist as "Octavius" rather than "Augustus" in this review. Williams offers a complex portrayal of a complex individual and era which includes many fascinating individuals in addition to Octavius.

The work is in three parts. The first part follows the rise of Octavius and centers upon public life -- the rise of the young man when he comes to Rome with a few friends and allies. Octavius gradually rises to power and ends the ruinous civil wars plaguing Rome. The other major figure in the first part of the book is Mark Antony who sometimes works with Octavius but more often is his enemy. The book takes the reader through many battles including the Battle of Phillipi in which Antony and Octavius vanquished Brutus and Cassius, both of whom who had left Rome following their participation in the assassination of Julius Caesar, and the Battle of Actium, a sea battle in which the forces of Octavius destroyed Antony who was fighting on behalf of the treacherous Egyptian queen, Cleopatra. Rome faced many other military threats, including a threat from a pirate, Pompeiuus. The first part of the novel includes much fighting, and poltitical intrigue and character development in showing Octavius' rise to the position of Emperor.

The second part of the book is set in the "Pax Romana" -- the lengthy period of Octavius' reign in which Rome faced no significant internal civil war or external threat. On the whole, this part of the book is more internally focused than the first part; but events of state are interwoven throughout with Octavius' personal life. A substantial part of the story examines the role of women, both in their relationship to Octavius, in their relationship to other men, and for themselves. Octavius' beloved daughter Julia assumes a prominent role through her (fictitious) journal. Octavius' skills as a ruler are shown, as is his love of poetry and learning. An important theme of the book is the relationship between personal and professional identities and roles, both of which tend to get lost and confused in the course of Octavius' life and, broadly, in the lives of most individuals in whatever culture and era they live.

In the brief third part of the book, Octavius speaks in his own voice for the first time in the novel in the form of a long letter to a friend written near death. This part is the fitting capstone of the novel as Octavius (through Williams' imaginative voice) reminisces about how he sees his earlier life, its accomplishments and failures. This portion of the book is beautifully written (even by the high standards of the rest of the novel) with philosophical reflections on youth, middle age, and old age, discussions of power, wars, betrayals, sexuality, and love, the life of the mind, and religion. Williams creates a thoughtful, reflective individual with much to say about life, in Roman times and in our own.

I loved this book, together with the two other Williams novels each of which is highly different in themes and writing styles. Williams avoids in "Augustus" the temptation to draw easy parallels to the events of his day allowing instead his characters and his era to speak for themselves. The result is a slow, compelling reflection on the complexities of a historical person, on a historical era, and on the human condition.