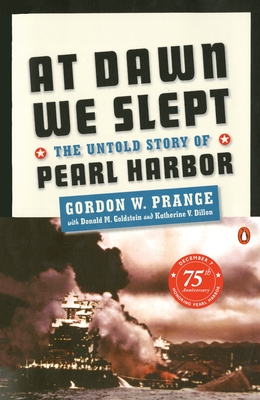 At Dawn We Slept: The Untold Story of Pearl Harbor

The monumental history of Pearl Harbor that The New York Times called "impossible to forget"--now with a new chapter by Goldstein and Dillon. Based on 37 years of massive research and countless interviews, this is a landmark study written with the dramatic sweep of a martial epic. 16 pages of photographs. Read More

The monumental history of Pearl Harbor that The New York Times called "impossible to forget"--now with a new chapter by Goldstein and Dillon. Based on 37 years of massive research and countless interviews, this is a landmark study written with the dramatic sweep of a martial epic. 16 pages of photographs. Read Less

All Editions of At Dawn We Slept: The Untold Story of Pearl Harbor

Target Tokyo: The Story of the Sorge Spy Ring

Goodbye Darkness: A Memoir of the Pacific War

Eagle Against the Sun: The American War with Japan

Day of Deceit: The Truth about FDR and Pearl Harbor

Pearl Harbor: The Verdict of History

Not much to add to previous reviews. Gives good military and political overview without becoming too burdensome. Excellent.

The attack on pearl harbor is one of the pivotal events in United States history. While this may be true there is much ignorance concerning the events that lead up to the attack. Mr Prange has presented a history that reads part mystery (even though the climax is already known by the reader) and part great sea story. I recommend this book for anybody with a curiosity about what really happened at Pearl Harbor.

Every stitch of information

This book took the author some years of research and the result is a heavy tome which covers all aspects of the event - almost to the point of tedium.
If you a doing a thesis on the subject then this is the book for you - otherwise it's a bit like chewing gum for the brain.

With truly engaging narrative and historically accurate commentary, G. Prange's book is extremely well researched and documented. The references are comprehensive and, as near as this reader can determine, accurate and quite complete. The author's near-compulisive attention to detail sets the ocassion and scene for a chronological trip back in time. His description, explanation and development of the national, social, religious, psychological and military influences for both Japan and the U.S., and his characterization of the major figures add a sense of drama and involvement that is too often missing in other attempts to examine the "zeitgeist" of 1941 and the events preceding the fateful attack on Pearl Harbor. It is a history of people and thereafter, events; certainly not the typical Japanese-bashing, propogandist tripe found in other literary attempts. It is not an overstatement to say that this is a book that will keep the reader engaged - if not mesmerized - in thoughtful reflection, as he/she 'relives' the past. Very highly recommended to anyone with a sincere interest in 'how' America became involved in WWII and in 'why' Japan initiated an attack that succeeded beyond expectation. As expected, there are a few chapters devoted to assignment of "blame' - scapegoating - to the U.S. Naval officers at Pearl. But we know how it ended, don't we? Of course, that's another story!