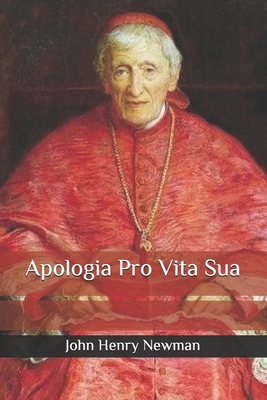 Even before the publication of his masterwork, John Henry Newman had been regarded as one of the most important religious thinkers on the 19th Century. His decision in 1845 to leave his Anglicanism behind and convert to the Roman Catholic faith was one that rocked the Victorian establishment at a time when virulent anti-Catholic feeling ran high. It was in response to one particularly vicious attack - by the Reverend Charles Kingsley - that Newman wrote his Apologia Pro Vita Sua. A humane and vivid account of the ... Read More

Even before the publication of his masterwork, John Henry Newman had been regarded as one of the most important religious thinkers on the 19th Century. His decision in 1845 to leave his Anglicanism behind and convert to the Roman Catholic faith was one that rocked the Victorian establishment at a time when virulent anti-Catholic feeling ran high. It was in response to one particularly vicious attack - by the Reverend Charles Kingsley - that Newman wrote his Apologia Pro Vita Sua. A humane and vivid account of the development of his ideas and his faith and a passionate defence of both, the book remains a landmark work of Victorian literature and autobiography and one that continues to resonate to this day. Read Less

The Idea of a University

Stations of the Cross

The Arians of the Fourth Century

The Idea of a University

The Imitation of Christ

by Thomas A Kempis

From church to church

John Henry Newman was a remarkable man and a devout lover of God. That he was writing in the 19th century in no way reduces the importance nor interest of his ideas.
He is often considered disloyal to the Anglican church, in which he was born and for many years preached. His sermons are examples of communication at its finest. This man knew and loved his God. Unfortunately (for Anglicans), his studies and devotions directed him to the belief that the Roman Catholic Church was the "true" church and he converted.
Nevertheless, because of his learning and his excellent writings, he was made a cardinal of the church and continued to assist others in their search for a meaningful religion during a period of intense rationalism and the growth of commercialism.

I first read Newman's Apologia when I was a 14-year-old seminarian. I am now 71 and, at this age, I appreciated it all the more.

John Henry Newman was born in London on February 21st, 1801. His father was a banker and John was the eldest of six children. When he was seven, Newman began to attend a private school where, at the age of fifteen, he was converted. ?I had no formed religious convictions till I was fifteen.? He speaks of the incident as being ?more certain than that I have hands or feet?. At the end of 1816 Newman began studies at Trinity College, Oxford. After a shaky beginning he was eventually elected to a fellowship at Oriel in 1822.
Newman was ordained to the priesthood in the Anglican Church on June 13th, 1824. Shortly afterwards, he was appointed curate of St. Clement?s, Oxford. In 1826 he became tutor of Oriel and a preacher at Whitehall in 1827. By 1830, Newman?s views had shifted from the Evangelicals and he eventually severed from the Low Church party. Newman reached his influential height at Oxford in 1839 at which time he first began to doubt concerning Anglican claims of authority. He retired to Littlemore in 1842 with a few followers. There, he wrote his Essay on the development of Christian doctrine.
Blessed Dominic Barberi formally received Newman into the Catholic Church on October 9th, 1845 and he was later ordained in the Roman rite. This was a devastating blow to the established Church of England as Newman was widely considered to be its brightest mind. Newman was, at the time, very popular and influential in the Anglican Church and at Oxford. He returned to England in 1847 as an Oratorian (an order of priests founded by Saint Philip Nieri in the 16th century). Newman spent four years in Ireland in the middle of the 1850?s at the Catholic University of Ireland. He served as rector and there he produced his famous series of lectures known as The Idea of a University.
In 1879 Newman was elevated to a cardinal in the Catholic Church by Pope Leo XIII. This was a special honor, as he was not previously a bishop, nor did he reside in Rome. He died on August 11th, 1890 and was proclaimed venerable in 1991. The cause for his beatification and canonization is ongoing.

In 1864 Charles Kingsley wrote an anonymous article in Macmillan?s Magazine in which he stated: ?Truth for its own sake has never been a virtue for the Roman clergy. Father Newman informs us that it need not to be?? When Newman complained to the magazine, the author?s name was revealed. A correspondence then began between Newman and Kingsley which Newman later published as evidence that Kingsley?s opinions were unfounded. In response, Kingsley published the pamphlet What, Then, Does Doctor Newman Mean?, in which he defended his own statements and made further attacks upon Newman and Roman Catholicism. Newman?s epic defense was his work entitled Apologia Pro Vita Sua which he completed in three months. In it, Newman retraces his journey to Catholicism from when he was a child. The Apologia is interesting in that it shows the subjectivity involved in Newman?s, and anyone?s, path to Catholicism. Beautifully written, and theologically provocative, it was an immediate success and has been a classic in its genera ever since.