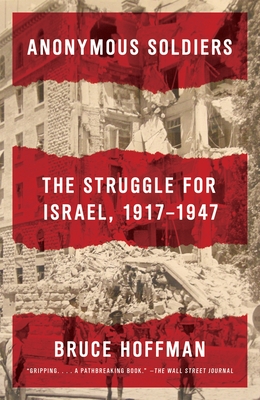 A landmark history, based on newly available documents, of the battles between Jews, Arabs, and the British that led to the creation of Israel Anonymous Soldiers brilliantly re-creates the crucial period in the establishment of Israel, chronicling the three decades of growing anticolonial unrest that culminated in the end of British rule and the UN resolution to create two separate states. This groundbreaking book tells in riveting, previously unknown detail the story of how Britain, in the twilight of empire, struggled ... Read More

A landmark history, based on newly available documents, of the battles between Jews, Arabs, and the British that led to the creation of Israel Anonymous Soldiers brilliantly re-creates the crucial period in the establishment of Israel, chronicling the three decades of growing anticolonial unrest that culminated in the end of British rule and the UN resolution to create two separate states. This groundbreaking book tells in riveting, previously unknown detail the story of how Britain, in the twilight of empire, struggled and ultimately failed to reconcile competing Arab and Jewish demands and uprisings. Bruce Hoffman, America s leading expert on terrorism, shines new light on the bombing of the King David Hotel, the assassination of Lord Moyne in Cairo, the leadership of Menachem Begin, the life and death of Abraham Stern, and much else. Above all, Hoffman shows exactly how the underdog anonymous soldiers of Irgun and Lehi defeated the British and set in motion the chain of events that resulted in the creation of the formidable nation-state of Israel. This is a towering accomplishment of research and narrative, and a book that is essential to anyone wishing to understand not just the origins of modern-day Israel or the current situation in the Middle East, but also the methodology of terrorism. Drawing on previously untapped archival resources in London, Washington, D.C., and Jerusalem, Bruce Hoffman has written one of the most detailed and sustained accounts of a terrorist and counterterrorist campaign that may ever have been seen, and in doing so has cast light on one of the most decisive world events in recent history. This will be the definitive account of the struggle for Israel for years to come. " Read Less

All Editions of Anonymous Soldiers: The Struggle for Israel, 1917-1947

Terror on the Internet: The New Arena, the New Challenges

The Victims of Terrorism: An Assessment of Their Influence and Growing Role in Policy, Legislation, and the Private Sector

State of the Struggle: Report on the Battle Against Global Terrorism

The Radicalization of Diasporas and Terrorism: A Joint Conference by the Rand Corporation and the Center for Security Studies, Eth Zurich

The Hundred-Year Walk: An Armenian Odyssey

Barefoot to Billionaire: Reflections on a Life's Work and a Promise to Cure Cancer

Catch-67: The Left, the Right, and the Legacy of the Six-Day War

Small Wars, Faraway Places: Global Insurrection and the Making of the Modern World, 1945-1965

Terrorism In The Establishment Of Israel

Bruce Hoffman's book, "Anonymous Soldiers: The Struggle for Israel, 1917 -- 1947" (2015) examines the role of terrorism during the British Mandate for Palestine and explores how terrorism contributed to Britain's decision to abandon the mandate and to the subsequent formation of the State of Israel. The book's title derives from a song composed by the terrorist Abraham Stern which became the anthem of Jewish terrorist groups in Palestine. Here is the refrain of the song:

"In the red days of riots and blood,
In the dark nights of despair,
In the cities and villages our flag we will raise,
And on it: defense and conquest!

We are not conscripted by the whip like multitudes of slaves,
In order to spill our blood in foreign lands.
Our desire: to be forever free men!
Our dream: to die for our nation."

Hoffman is the director of the Center for Security Studies and director of the Security Studies Program at Georgetown University, and he works with the United States military in advising how to combat terrorism. "Anonymous Soldiers" examines the circumstances in which terrorism is effective in achieving its goals and in influencing the policy of a larger state. There are wide-ranging views on this complex question. The focus of Hoffman's book is on Jewish terrorist activities primarily during the latter part of Britain's Mandate following WW II and on how these activities played a role in convincing Britain to leave Palestine. Hoffman's concludes that terrorism has frequently proved to be an effective instrument. His book is a study of history and, perhaps, includes some lessons for decision makers on how terrorism may be most effectively fought in specific instances.

Hoffman's book relies in part on many documents from Britain, Israel, and elsewhere that have only recently been made public. The book begins with the Balfour Declaration, Britain's 1918 conquest of Palestine, and the mandate the League of Nation gave to Britain in 1922. The book explores a complex multi-faceted history while focusing on terrorism. As Hoffman summarizes his study, the early chapters of the book cover the years 1917 through the early years of WW II. It discusses the fighting almost from the outset between Jews and Arabs, early Arab terrorist outbreaks such as the Arab Rebellion of the late 1930s, and the beginning of Jewish terrorist organizations.

The second part of the book discusses the WW II years. During this time, one of the two primary Jewish terrorist organizations suspended its activities in order to support Britain while the other group continued its efforts at isolated terrorist acts, often directed at individual figures. Hoffman discusses the split between these two groups and the reaction of the mainstream Jewish governing authority in Palestine.

The third and most detailed part of the book examines Jewish terrorist activities post WW II as the press to end Britain's mandate intensified. The ultimate result of the terrorism during this period was to make the continuation of the mandate untenable. The book discusses the terrorists and their techniques at length. Many incidents large and small are discussed closely. The book discusses the assassination of British Lord Moyne, the Minister of State for the Middle East, the bombing of the King David Hotel and many other incidents. The book concludes with an excellent extensive epilogue which summarizes the results of the lengthy study and places the discussion of terrorism in a broader perspective.

Much of the book studies Britain's response to terrorism and the reasons why its varied responses failed. Hoffman points to factors such as the lack of an effective police force, the tendency to rely too heavily on military as opposed to political solutions, conflict between the police, the military, and the British Government over the administration of the mandate and the proper response to terrorism, inflexibility and misunderstanding the situation on the ground, the support rendered by the United States, Britain's increasingly perilous financial situation following WW II and more. Hoffman sensibly identifies the primary problems with Britain's response: its lack of a sense of what it was to do in Palestine and why and its inability to address the seemingly intractable conflict between Arabs and Jews that still persists and shows little signs of abating.

The book is well-written, thoroughly researched and thoughtful. It tends to get bogged down in detail in places. Hoffman carefully points out that his book is not a broad history of Palestine under the British Mandate but focuses instead on the specific subject of terrorism. Thus the book should not be read as a full history of the British mandate, or of the Arab-Jewish conflict in the years predating the establishment of Israel. The book has much to say about its limited subject even for readers without a strong background in the Arab-Jewish-British conflict as long as the specific issue the book addresses is kept in mind. Within its subject, Hoffman's book focuses much more on Jewish terrorism rather than on the earlier Arab terrorism, presumably because it played a large role in the abandonment of the mandate and, hence, was more successful in achieving its aims. Besides the study of terrorism, I learned a great deal from this book. I had never focused entirely on the broad conflict between Arabs and Jews from the outset -- beginning no later than 1922. It made it harder to take a strong, moralizing stance in this matter for one side or the other. The conflict has long historical roots and, unfortunately, remains to be resolved. This book allows the reader to get one aspect of the conflict through its focus on terrorism during the years of the British mandate.