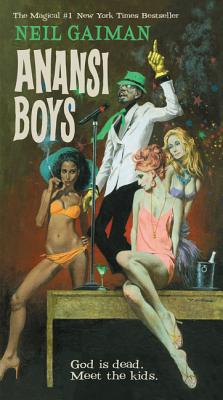 A kaleidoscopic journey deep into myth from bestselling storytelling legend Neil Gaiman, bestselling author of American Gods and Norse Mythology. A BBC Radio 4 adaptation of Anansi Boys, featuring an all-star cast lead by Lenny Henry, premiered on Christmas Day 2017 and can be listened to worldwide on iPlayer. 'Exhilarating and terrifying' Independent 'A warm, funny, immensely entertaining story about the impossibility of putting up with your relations - especially if they happen to be Gods' Susanna Clarke Fat ... Read More

A kaleidoscopic journey deep into myth from bestselling storytelling legend Neil Gaiman, bestselling author of American Gods and Norse Mythology. A BBC Radio 4 adaptation of Anansi Boys, featuring an all-star cast lead by Lenny Henry, premiered on Christmas Day 2017 and can be listened to worldwide on iPlayer. 'Exhilarating and terrifying' Independent 'A warm, funny, immensely entertaining story about the impossibility of putting up with your relations - especially if they happen to be Gods' Susanna Clarke Fat Charlie Nancy is not actually fat. He was fat once but he is definitely not fat now. No, right now Fat Charlie Nancy is angry, confused and more than a little scared - right now his life is spinning out of control, and it is all his dad's fault. If his rotter of an estranged father hadn't dropped dead at a karaoke night, Charlie would still be blissfully unaware that his dad was Anansi the spider god. He would have no idea that he has a brother called Spider, who is also a god. And there would be no chance that said brother would be trying to take over his life, flat and fiancee, or, to make matters worse, be doing a much better job of it than him. Desperate to reclaim his life, Charlie enlists the help of four more-than-slightly eccentric old ladies and their unique brand of voodoo - and between them they unleash a bitter and twisted force to get rid of Spider. But as darkness descends and badness begins is Fat Charlie Nancy going to get his life back in one piece or is he about to enter a whole netherworld of pain? Read Less

All Editions of Anansi Boys

Odd and the Frost Giants

I have been a Neil Gaimon fan every since I picked up my first copy of American Gods several years ago. This author has a unique ability to talk about the connection between our own world and the otherworlds that are out there.

As a pagan Druid I have always believed that the gods walked among us. This book and American Gods both touched deeply on this subject.

The premise of the book is that the two sons of a god meet each other after the god dies. They don't really get along and they have a lot of conflicts but by the end of the book they have figured out a way to work together against their common enemy.

Highly recommend to all lovers of sci-fi, fantasy and mystical reads.

I don?t think I ever wrote a review of American Gods, by Neil Gaiman. But I wish I had. It was pretty good minus one weird part. Plus, if I had I could compare Anansi Boys to it with some degree of success.

There are totem gods. These aren?t like Thor or Zeus or something like that, but more primal- the gods who represent all of something or another. Like the chinese zodiac creatures. There?s horse, monkey, rat, tiger, etc. Each totem god represents all of the living creatures that it?s shaped like, has control over them, and represents all the ideals of them. So tiger is terrible and aggressive, bird is flighty and yet vicious.

Anansi is the spider god. The trickster god. He stole all the stories that were created with the world and made them his own, so everybody hates him - especially tiger, because once all mankind was afraid of the night, and tiger was in control.

Just as in American Gods, the main character is the child of a god. Of Anansi, to be precise. A half-god, you could say. He just doesn?t know it. And it?s just as well since he?s happy living as a normal human being.

But what happens when an old woman splits the Anansi boy in two as a child? Are they both half god? Or is it that one is all god and one is all human? And when old Anansi dies mysteriously, what will it mean for the Anansi boys?

Anansi boys was a pretty good read. Easy to read, interesting story, and pretty good characters. I actually thought it was a little too easy to read - to the point of lacking depth. This book runs more like a comic book than a novel. I don?t know that it?s good or bad that way. And, while Gaiman is skilled as a writer (far more than me, that?s for sure) his true strengths are in his creativity and ability to tell stories. This means that unless he spends a lot more time on his novels than he does on his comics we end up with a book that is fun to read rather than one that has greater meaning and depth and therefore feels more rewarding.

Not that it?s bad, it?s just who he is and how he writes. And even if it isn?t ?meaningful? it sure is fun - which ought to be why you pick it up in the first place. The story runs like a spiderweb connecting characters again and again as time goes on, drawing them to the inevitable center where it all comes together and we see who will make it out of old Anansi?s story.

I enjoyed this book as a real escape from everyday stress. It has some things in common with Gaiman's other adult books including sf elements that blur normal perception of things like death, time, morality combined with nice human touches. There are good guys and bad guys. I really liked Gaiman's use of ancient legends and religions along with keeping music in its rightful, important place in our lives. While I think I prefer American Gods to this book, it was very well done and most enjoyable.