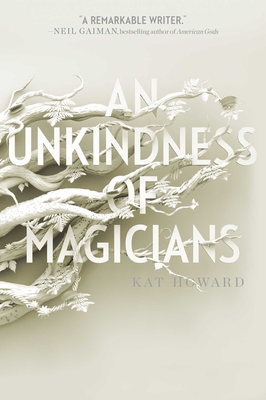 An Unkindness of Magicians

"A remarkable writer." -Neil Gaiman, bestselling author of American Gods An Alex Award Winner There is a dark secret that is hiding at the heart of New York City and diminishing the city's magicians' power in this fantasy thriller by acclaimed author Kat Howard. In New York City, magic controls everything. But the power of magic is fading. No one knows what is happening, except for Sydney-a new, rare magician with incredible power that has been unmatched in decades, and she may be the only person who is able to stop the ... Read More

"A remarkable writer." -Neil Gaiman, bestselling author of American Gods An Alex Award Winner There is a dark secret that is hiding at the heart of New York City and diminishing the city's magicians' power in this fantasy thriller by acclaimed author Kat Howard. In New York City, magic controls everything. But the power of magic is fading. No one knows what is happening, except for Sydney-a new, rare magician with incredible power that has been unmatched in decades, and she may be the only person who is able to stop the darkness that is weakening the magic. But Sydney doesn't want to help the system, she wants to destroy it. Sydney comes from the House of Shadows, which controls the magic with the help of sacrifices from magicians. Read Less

All Editions of An Unkindness of Magicians

A Gathering of Shadows

A Conjuring of Light

An Unkindness of Magicians gave me a little of Blue Bloods vibe in the start, with a close knit group of elites in New York city being supernatural, or in this case, capable of wielding magic. In the Unseen World, there are many Houses of magic, and at each Turn, there is a magical competition to establish the new order in their hierarchy. They say its the Fortune's Wheel turning, but for the last few Turns, the House of Merlin has been ruling the Unseen World and maintaining the barbaric practice of using the House of Shadows to generate a magical pool for the magicians to draw from. Sydney, a victim of the House of Shadows and who was brought up in it, is now participating in the current turn to burn that system down.

The Unseen World runs on strength and the illusion of power, and the magicians who live in it mostly don't mind that what they take for granted is the pain of other magicians. Magic has a price and instead of paying it, they utilize the House of Shadows to draw from 'sacrifices'. Sydney, a prodigious magician, is an Outsider for the rest of the Houses and when she aligns herself with Laurent, who is also an outsider for the Unseen world, most of the snobbish Houses look down upon them. With her very first duel, however, she silences them and shows that age and tradition doesn't equal might. She also catches the eye of Ian, another powerful magician who is championing for House Prospero, and who like her, uses the magic generated from his own pain. The two have a little Night Circus-like situation going on, but their romance is not the focus of this story.

While the central arc of the story is the Turn, and the duels that take place, there is also a serial killer magician who has been killing the less powerful magicians, mostly girls in order to attain their power. A former heir of Prospero, he feels entitled to magic and resentful of his mother Miranda, who is the matriarch of House Prospero. Family loyalties and betrayals continue to intertwine these characters, and play out in the story. While Sydney is fighting to win the competition, another mundane with a spark of magic, Harper is looking to get into the Unseen World so that she can look for the killer of her best friend. There are also some amazing friendships developed during the course of the novel.

The whole story has a lot going on, and is well-constructed, like Sydney's spells. There are also some beautifully described spells and duels rendered. I, however, felt they weren't exciting enough, particularly in the start where it was more like a magical spell-off. They were given a theme, and who did the most showy and spectacular magic would win. The later mortal challenges were a bit more intense, but with Sydney's skill, there isn't every any real danger. And which is why when the ending comes, it falls apart a little. Until then, the story had a very good pace and structure, and there were multiple story arcs and perspectives going on, but as it approached the climax, it wobbled off course, and what could have been an exciting and challenging duel for Sydney was wrapped up too fast, and continued into an epilogue where things are (excuse the pun) magically resolved. Yes, this was a standalone, but the ending felt lacking, more so because the rest of the book was so done so well.

The narrator did a good job, but at times, her voices for the male characters made it difficult to judge their age. Like, it took me plenty of time to realize that most of the characters were in their twenties and that Laurent was not, as he sounded, in his 50s.

Overall, though, this is still an interesting novel with a dark world, and a good balance of magical and horrific.