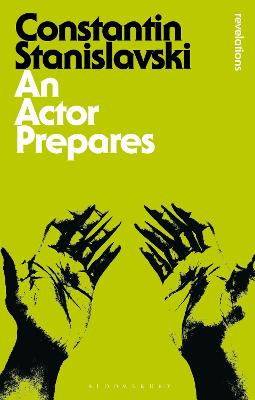 "Stanislavsky's now famous book is a contribution to the Theatre and its students all over the world." Sir John Gielgud An Actor Prepares is the most famous acting training book ever to have been written and the work of Stanislavski has inspired generations of actors and trainers. This edition, now reprinted with a new cover and more accessible price has stood the test of time in acting classes all over the world and was the original English language translation. A classic text for every actors library. Stanislavski deals ... Read More

"Stanislavsky's now famous book is a contribution to the Theatre and its students all over the world." Sir John Gielgud An Actor Prepares is the most famous acting training book ever to have been written and the work of Stanislavski has inspired generations of actors and trainers. This edition, now reprinted with a new cover and more accessible price has stood the test of time in acting classes all over the world and was the original English language translation. A classic text for every actors library. Stanislavski deals with the inward preparation an actor must undergo in order to explore a role to the full. He introduces the concepts of the 'magic of' units and objectives, of emotion memory, of the super-objective and many more now famous rehearsal aids. An inspirational book presented in a drama class structure to ignite powerful performances. "An Actor must work all his life, cultivate his mind, train his talents systematically, develop his character; he may never despair and never relinquish this main pupose - to love his art with all his strength and love it unselfishly." Constantin Stanislavski Read Less

All Editions of An Actor Prepares

An Actor's Handbook: An Alphabetical Arrangement of Concise Statements on Aspects of Acting, Reissue of First Edition

Audition: everything an actor needs to know to get the part

"An Actor Prepares" is the first book in a three-part series, and the textual source for the "System" that Constantin Stanislavski developed at the Moscow Art Theatre through years of performance and rehearsal.

Mythologized primarily by the acting community in America, this 313-page edition from Routledge originally published in 1936, and reprinted since, is still a wealth of solid technique for the actor fresh to the craft and for the experienced actor as well.

The book is excellent, putting forth "general principles of art" and a great guideline for performance in particular, although at times it may seem a little silly. Keep in mind that the story is one of a group of students learning about acting for the first time.

The world of the book, an acting school where an instructor leads his students to truths about performance, allows us to understand these principles in clear simple examples.

As told by Kostya Nazvanov, one of the fictional students in the acting school of the story, the story can resemble a feel-good Corey Feldman film form the 80s - good clean fun for the arts-afflicted actor- it is completely functional!

Stanislavski does this by creating fictional student types who respond to new ideas in a variety of ways in which he reader will identify with, thus allowing understanding through a third person, and enlightening us directly.

The key to using the book is not necessarily with a class instructor, although discussing with another actor or group is probably best than working alone.

But the genius of the book is that is a story being told by an actor in a class and seeing how he deals with new ideas and certain peer pressure in the creative environment draws us in.

The story of this book, as well as the two succeeding texts, "Building a Character" and "Creating a Role" is instructional and entertaining (although more to the creative performance artiste, than to the layman)- you learn by getting involved in the semi-fiction of the tale.

There are two ways to read the book- for the experienced actor look over the contents and go to a chapter that interests you. From there you can allow your curiosity to lead you to other parts of the book. The writing style will pull you into other chapters because there is a certain mystery that the author is attempting to discover, and this is the hook of the book.

For the actor coming to performance art with a little experience, it's best to read the first chapter first, to get used to who the characters are and the names (Russian can sometimes throw us off at first glance), get a feel for the writing style (it is not instructional, it's a story- enjoy how the tale is being told). Take time to enjoy the story.

There is a great underlying humor in Stanislavski's style, let it affect you, it will make this book and the two following very pleasurable.

Stand-out chapters: Chapter 8 "Faith and a Sense of Truth" is one of the longest chapters in the book with eleven sections, and it opens with an area than any actor will appreciate.

In the first section theory is reduced to a simple sentence: "Put life into all the imagined circumstances and actions... satisfied your sense of truth... awakened a sense of faith in the reality of your sensations". This will serve any actor anywhere at any level.

It is my favorite chapter because the basic elements that are covered in the other chapters are things I don't need to revisit.

The rest of the book has equally valuable kernels of knowledge and is a fun book to read.

If you're not an actor you'll get a chuckle from the angst that grips so many performing artists. For the actor it will let you see yourself and the seemingly insurmountable obstacles that confront you in approaching a new role reduced to easily understandable attainable goals.