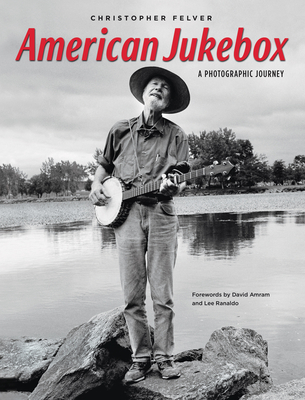 Scattered throughout are playlists, autographed lyrics, record sleeves, and contributions by musicians sharing their memorable experiences of the era. Read More

Scattered throughout are playlists, autographed lyrics, record sleeves, and contributions by musicians sharing their memorable experiences of the era. Read Less

The Importance of Being

The Importance of Being

How American Music Goes On

A photographer and filmmaker, Felver has published books and directed films that focus on the Beats and on American artists. His introductory essay for "American Jukebox" is an autobiography which shows how, as a child of the counterculture, he wandered as a young man over both Europe and the United States pursuing his passions for the beats, poetry, photography, and music, all of which are reflected in this book.

"American Jukebox" consists of over 240 black and white photographs of American musicians that Felver took between 1976 and 2013. Some of the photos show the musicians performing but most are posed. The photos were taken at festivals, clubs, and performances ranging from New York, to Monterey, to New Orleans. In many of them, the subjects look the viewer directly in the eye, often holding their instruments. Sometimes the subjects look happy, sometimes serious or pensive. Each of the photos immediately engages the viewer.

The photos cover the broad range of American music from classical through jazz, blues, folk, country, rock, rap, alternative, pop, and more. Among many other, the subjects of the photos include Ned Rorem, Sonny Rollins, Sun Ra, Irma Thomas, B.B, King,, Ramblin' Jack Elliott, Cab Calloway, John Baez, Tony Bennett, and Pete Seeger. Many of the subjects will be familiar to most viewers while others will be new. Woodie Guthrie (1912 -- 1967) and the late Pete Seeger (1919 --2014) have a large presence in the book. They capture the character of both jukebox and troubadour.

"American Jukebox" is a joy. It made me think about American music and to turn to that modern equivalent of a jukebox, you-tube, to hear some of the songs of America's troubadours. In addition to the photos, the book includes, essays, reminisces, and other contributions from nineteen of the photographic subjects, including Ed Sanders, John Cage, Rosanne Cash, and Ramblin' Jack Elliott. It also includes brief Forewords by composer David Amram and by the founder of Sonic Youth, Lee Rinaldo. The music goes on forever.