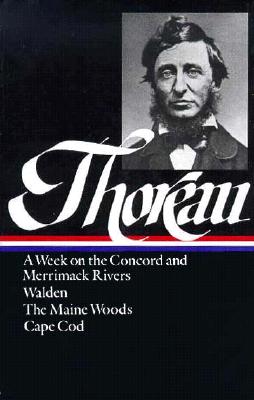 A week on the Concord and Merrimack rivers ; Walden, or, Life in the woods ; The Maine woods ; Cape Cod

Besides WALDEN, Thoreau's A WEEK ON THE CONCORD AND MERRIMACK RIVERS is the only one of his works to be published in his lifetime. Written while he lived in the Walden cabin, this book is a tribute to the trip he took with his older brother John, who died of lockjaw in his brother's arms when Thoreau was 25. WALDEN, his classic account of the solitary life, describing his attempts to simplify his life and sort out his priorities by living alone in a cabin beside Walden Pond for nearly two years, is one of the most ... Read More

Besides WALDEN, Thoreau's A WEEK ON THE CONCORD AND MERRIMACK RIVERS is the only one of his works to be published in his lifetime. Written while he lived in the Walden cabin, this book is a tribute to the trip he took with his older brother John, who died of lockjaw in his brother's arms when Thoreau was 25. WALDEN, his classic account of the solitary life, describing his attempts to simplify his life and sort out his priorities by living alone in a cabin beside Walden Pond for nearly two years, is one of the most influential books ever written. When he died, Thoreau was working on THE MAINE WOODS; Published posthumously in 1864, it is a brilliantly evocative journey into the world of Maine's inland wilderness. His account of his travels and explorations on Cape Cod is considered his most genial book, and one of his most appealing. Thoreau's CAPE COD, which was published in 1865 after his death, remains an indispensable guide to the area. Read Less

Thoreau In The Library Of America

While reading the four books of Henry David Thoreau (1817 -- 1862) included in this volume, I was reminded of the piano sonata no. 2, the "Concord" sonata by the American composer Charles Ives (1874 -- 1954) and decided to listen to it again to complement my reading. The Concord is a monumental work in which Ives tried to capture the "spirit of transcendentalism" associated with Concord, Massachusetts. Its four large movements bear the names of Emerson, Hawthorne, Bronson Alcott, and Thoreau. The "Thoreau" movement of the Concord captured in music for me what I had been reading in Thoreau's texts, with its reflective arpeggios, long hymnlike introspective passages, distant sounds of bells, and quiet close. Ives wrote the movement, he said, to reveal the "vibration of the universal lyre" to which Thoreau had alluded in the chapter of Walden titled "Sounds". Those who love Thoreau or the American Transcendentalists should explore Ives's great musical tribute to them and their thought.

This volume is the first of two in the Library of America devoted to Thoreau, with the second book consisting of essays and poems. It includes the two books published during his lifetime, "A Week on the Concord and Merrimack Rivers" and "Walden" together with two books published shortly after his death, "The Maine Woods" and "Cape Cod". The former two books are philosophical and introspective in tone, even though they include much of the descriptive writing about nature for which Thoreau is famous. They are the writings of Thoreau the Transcendentalist, the Thoreau of Ives's Concord Sonata. The second two books are describes Thoreau's travels. They originated the American practice of writing about nature.

Thoreau's most famous book, "Walden" describes the two years he spent living at Walden Pond, near Concord, from 1845 -- 1847 on a tract owned by Emerson. Walden is deservedly an American classic, as Thoreau reflects upon and attempts to simplify his life, to appreciate it for itself and for the everyday, without the strains of commerce or the pursuit of wealth. It is an eloquent study of learning to be alone with and content with oneself.

Thoreau wrote the first draft of "Walden" while he resided there and also wrote "A Week on the Concord and Merrimack Rivers" which in 1849 became his first published book, enjoying little success at the time. This book describes a trip Thoreau took with his brother and there are many detailed observations of people, places, and plants and animals. But the book is full of detailed digressions on literature, philosophy, the Greek Classics, friendship, and Thoreau's religious beliefs. This book shows the large influence of Eastern thought on Thoreau. It is filled with allusions and quotations from poetry on virtually every page. It is a joy to read.

There is little overt philosophizing in Thoreau's latter two books. But both these books made me want to leave, at least for a short time, my life in the city and to run and visit the wild places Thoreau described. In "The Maine Woods" Thoreau describes three trips he took to Northwest Maine -- its forests, rivers, lakes, and mountains, in 1843, 1853, and 1857. It includes detailed descriptions of rugged camping, in the rain and sun, on water and on land. The highlight for me was Thoreau's discussion in the first essay of the book of his climb on Mount Ktaadn, with Thoreau's description replete with both actual description and ancient Greek and American Indian symbolism.

Thoreau's final book, "Cape Cod" describes three visits in 1849, 1850, and 1853 (A fourth, later visit to the Cape is not included in the book.) This is Thoreau's only book which features the ocean and the seashore. It describes a rugged place, but the tone is leisurely and humorous in many places as Thoreau takes his reader on a thirty-mile "ramble" over the Cape. Thoreau introduces a memorable character in his chapter "The Wellsfleet Oysterman" and draws a picture of a lighthouse, no longer standing, on the Cape, "The Highland Light." Reading this book made me want to walk the sands and dunes that Thoreau walked and described over 150 years ago.

As with all volumes in the LOA series, this volume is lightly annotated but includes a valuable chronology of Thoreau's life which helps in approaching the texts. Transcendentalism and naturalism both have played critical roles in the development of American thought and you will find them both here. And if you enjoy Thoreau, I encourage you again to approach Ives's masterpiece, the "Concord Sonata" and meet Thoreau realized in sound.