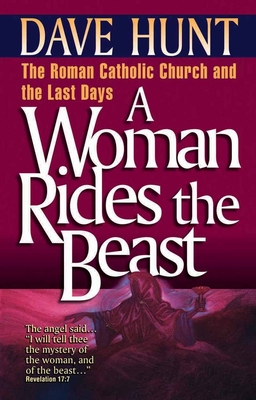 A Woman Rides the Beast

An eye-opening book about prophecy, Catholicism, and the last days. Has the view of the Church of Rome as the woman who rides the beast in Revelation 17 become outdated? Hunt carefully sifts through history and prophecy to provide an answer. Read More

An eye-opening book about prophecy, Catholicism, and the last days. Has the view of the Church of Rome as the woman who rides the beast in Revelation 17 become outdated? Hunt carefully sifts through history and prophecy to provide an answer. Read Less

The Seduction of Christianity

What Love Is This?: Calvinism's Misrepresentation of God

Disney Beauty and the Beast: The Story of the Movie in Comics

The Two Babylons: Or the Papal Worship

Beyond Seduction: A Return to Biblical Christianity

A Cup of Trembling: Jerusalem and Bible Prophecy

The book was in very good shape. Fast delivery. I would definitely buy from this seller again. Any books by Dave Hunt are excellent for readers like me that are into Biblical prophecy.

I felt the book had too much Catholic bashing and repitition. The same past events were continuously repeated. There was alot of information but not really sure how accurate it was since I am a Catholic and I don't remember experiencing things mentioned. By the end of the book it was obvious the author isn't happy with any denomination, seems like a very angery person. I felt the author used the Revelation Chapters as a way to bash Catholisism. I bought two other books by this author but I will not be reading them and I will burn this one.

Dave Hunt. Hunt always writes with clarity and simplicity when dealing with the most complex and even academic subjects. Though profound, anyone with average intelligence or education can find it an easy read. He brings both history and doctrine alive to the point of this book being literally unputdownable!
This most prolific of Christian writers is impeccably logical in his approach to such a sensitive and even controversial subject.
"A woman Rides the Beast" is the history of the Roman Catholic Church from its beginnings to the present day. It explains Catholic theology, dogma and politics -- subects of which few people are aware. As a former Catholic, I hasten to add, Catholics included.
This book is an essential read for Catholics and non-catholics alike.
It shows the hidden influence of the Vatican in international affairs and politics, its long history of antisemitism, its involvement with the Nazis and its outrageous and refutable historical and doctrinal claims.
Hunt has the same concept of Roman Catholicism as the men of the Reformation did -- as an antichristian, apostate church. In other words, it is shown the Whore who rides the Beast in the Book of Revelation, thus the book's title.
Dave Hunt, as in all of his books, never writes with prejudice. His logic is as tight as that of the other Christian great, C.S. Lewis. So he is not trying to offend Catholics. He is trying to win them to Bible Christianity. And he does so with the eye of a totally objective historian, the precision of a first class journalist in presenting hard facts, and the conviction of a theologian who can stand his unshakable beliefs on those facts. He knows they are irrefutable. And that's just what they are! YOu discover that as you read this virtual masterpiece of its genre.
Catholic apologists will surely argue against this book. If so, they will only be able to do so with the sophistry for which their theologians have been notorious throughout the centuries. That sophistry has embarrassed nominal, objective Catholics of our own day who have the liberty to dissent. One has only to think of the Vatican's attempts to cover up the lives of the Mediaeval and renaissance popes, the Borgias especially. I myself can remember the embarrassment of Catholics because the pro-Nazi stance of Pope Pius XII during World War II. Anyway, Hunt also deals with those matters.
One thing is for certain, no Catholic apologist can argue against this book with logic. It's simply impossible to do so. In other words, "A Woman Rides the Beast" is vintage Dave Hunt.
Far from being antagonistic towards the Catholic people, he dedicates the book to both Catholic and Protestant martyrs who both died for their respective beliefs. Still, having been educated by Roman catholic priests and nuns, I think the book will have many detractors among those catholics who bother to read it. And that's bad: They need to read it as much as everyone else.
Those who do read it will have an insight into what's going on behind the scenes in today's world that few leaders or politicians have. Not only would I recommend this book to my friends, I would recommend it to my enemies too! I would be seriously tempted to tell those who can't afford to buy it, to steal it. At all costs -- within the law! -- get your hands on this book and read it. You won't regret it. It is an education.

This book was not enjoyable - it was upsetting. I needed to read it to get an accurate history of the Catholic Church. Information that was definitely NOT given to me in 12 years of Catholic schooling.