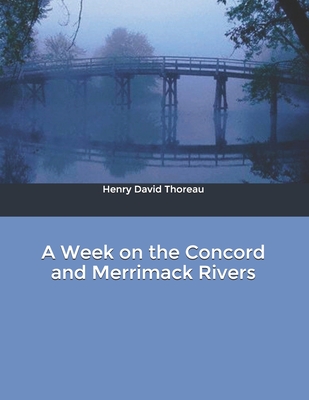 A Week on the Concord and Merrimack Rivers

A Week on the Concord and Merrimack Rivers is a book by Henry David Thoreau (1817-1862).[1] It is ostensibly the narrative of a boat trip from Concord, Massachusetts to Concord, New Hampshire, and back, that Thoreau took with his brother John in 1839. John died of tetanus in 1842 and Thoreau wrote the book, in part, as a tribute to his memory. Read More

A Week on the Concord and Merrimack Rivers is a book by Henry David Thoreau (1817-1862).[1] It is ostensibly the narrative of a boat trip from Concord, Massachusetts to Concord, New Hampshire, and back, that Thoreau took with his brother John in 1839. John died of tetanus in 1842 and Thoreau wrote the book, in part, as a tribute to his memory. Read Less

All Editions of A Week on the Concord and Merrimack Rivers

Civil Disobedience and Other Essays

Walden and Other Writings

Walden or Life in the Woods

A Week With Thoreau

In late August, 1839, Henry David Thoreau and his brother John took a two-week trip on the Concord and Merrimack rivers in a boat called the Musketaquid that they had built themselves. John Thoreau subsequently died of lockjaw in 1842, a death which greatly affected his brother. While living at Walden Pond from 1845-1847, Thoreau worked on the manuscript of what became "A Week on the Concord and Merrimack Rivers", and the book was first published, with little commercial success in 1849. A revised edition was published after Thoreau's death.

The book describes the Thoreau brothers' river journey on the Concord River from Concord west to Lowell, Massachusetts where it connects with the Merrimack River from Lowell north to Concord, New Hampshire. (The brothers spent one week on land exploring Concord, New Hampshire and its environs, and this is not described in the book.) At the time of the journey Lowell was already a manufacturing center where girls from New England farms lived in large barracks and worked long hours spinning cotton in factories powered by the Merrimack River.

I was familiar with "Walden", but I didn't know this earlier book of Thoreau's. It is a wonderful read. The book is arranged in seven chapters, one for each day of the river journey, and Thoreau describes extensively the rivers and inlets, the land, the plants and animals, the weather, the locks and the people that they encountered on their journey. Thoreau here and elsewhere has a clear and detailed eye for nature.

But the more fascinating part of this book consists of its extended digressions and discussions that are only suggested by the description of the brothers' journey. Thoreau uses the river trip as a jumping-off point for meditations on history, science, literature, education, philosophy, religion, and much else. There is information on the early settlements of Concord and Lowell and of New England, especially involving contact with the Indian tribes. Even with this, most of the book is internalized. On almost every page, Thoreau's text is interspersed with poetry, some of it his own, some by other writers. Thoreau discusses the ancient Greek writers, including Homer and the Greek lyricists, as well as writers including Shakespeare and Goethe. There are long meditations on subjects such as the nature of friendship. Thoreau discusses comparative religion and turns a critical eye on the Puritanical religion of New England. The book shows a great fascination with and knowledge of Eastern thought, which is striking for this time in America's history, particularly with the Bhagavad-Gita.

Near the end of the book, capturing the end of his trip, Thoreau assumes an oratorical tone and his work takes on a philosophical theme. Although the American philosophy of Transcendentalism is notoriously difficult to define, Thoreau here discusses a world beyond the world of our senses and of nature. He alludes to a world of the timeless and of mysticism, which encompasses all religion, and which the evidence of the senses only suggests to us. It is a difficult and inspiring vision, informed greatly by Eastern thought and by Thoreau's friendship with Emerson. The discussion forms a moving conclusion to the book.

With its learning, its love of poetry, its picture of early New England, and its spirituality, "A Week on the Concord and Merrimack Rivers" is one of the great American books. For readers who know Thoreau only, as I did, through "Walden" and "Civil Disobedience,", this book will be a revelation.