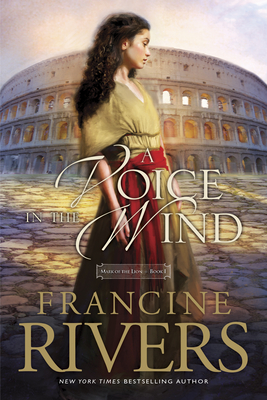 A Voice in the Wind

This classic series has already inspired nearly two million readers, but both loyal fans and new readers will want this 20th anniversary edition of a Christian classic, which includes a Foreword from the publisher, a letter from and Q & A with Rivers, color map, and more. Read More

This classic series has already inspired nearly two million readers, but both loyal fans and new readers will want this 20th anniversary edition of a Christian classic, which includes a Foreword from the publisher, a letter from and Q & A with Rivers, color map, and more. Read Less

All Editions of A Voice in the Wind

A Lineage of Grace: Five Stories of Unlikely Women Who Changed Eternity

As Sure as the Dawn

As Sure as the Dawn

I received my book today. I was a little disappointed. It was an older copy of the first book of my series. A Voice In The Wind, by Francine Rivers. The picture when ordering looked different from the actual book I received. The packaging fell apart in delivery. When I received the book the whole bottom of packaging was open. The book did not come with a receipt.
Kim

Francine Rivers is one of the best authors I have read. I could hardly put it down once I started reading. It makes you want to read the other 2 in the series.

This was one of Francine Rivers' early books. It is set in first century Rome, after the fall of Jerusalem, during the reign of Domitian and Vespasian. It follows four characters: Hadassah, a Jewess who has become a Christian, and is a slave to a spoiled Roman named Julia. Julia is selfish, and is in love with a gladiator named Atetes. Atetes is a German, brought to Rome as a slave, and forced to fight for the amusement of the Romans, hoping to one day be freed. The fourth character is Marcus, Julia's brother, who falls in love with the slave, Hadassah. Hadassah loves Marcus, but struggles to stand for her faith in a culture that strives to silence Christians.
It was a great story, making you feel like you were right there in the Colliseum with the early Christians, who were fed to the lions. I'm only sorry it ended where it did. I'm not sure if the second book in the series will pick up with some of these characters and give me some closure. The only fault I found with the book had to do with the head-hopping, which I found quite distracting. It 's not something I'd expect from a writer like Francine Rivers, but then again, it was one of her earlier books.

Couldn't put it down

The title says it all. The "set-up" chapters are a little slow, but once the main character gets to Rome, you will not be able to put the book, or the next in the series down. I have probably owned 6 copies that I lend out and never get back, they just keep getting passed around.

Francine Rivers is one of my idol-writer. I first heard about it from a friend,and then a teacher, and the another friend again. I wanted to try the book,so I did.This is the first book I fell in love with, I just couldn't let go (since it was not mine), but the second book came up and I made a promise with my friend that if I let go of the first book then she'll give me the second. I FINALLY let go but ended up not wanting to let go of the second one. This book made me want to be more like Hadassa (the main charachter).

This story is about a Jewish girl who was sold to a rich family in Rome. She was plain in the sight of others but rich in the sight of God. She alwayse trusted and loved God enverytime. The family she was sold to had an handsome older son and a very beautiful younger daughter. ( I will stop here and let you enjoy the book by yourslelf) Thank you for listenning. (^_*)!!