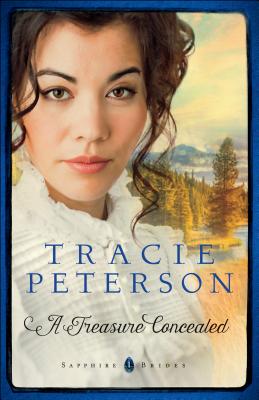 Tired of moving from one gold mining camp to another, Emily Carver longs to have a home of her own. When she meets Caeden, a newcomer to Montana, she feels drawn to the young geologist--and the feeling is mutual. But will an unexpected discovery drive them apart? Read More

Tired of moving from one gold mining camp to another, Emily Carver longs to have a home of her own. When she meets Caeden, a newcomer to Montana, she feels drawn to the young geologist--and the feeling is mutual. But will an unexpected discovery drive them apart? Read Less

All Editions of A Treasure Concealed

Secrets of My Heart

A Treasure Concealed by Tracie Peterson is a historical, Christian romance novel and the first book in the Sapphire Brides series. It is 1895 in Yogo City, Montana. Emily Carver's mother, Nyola is ill. Emily is doing her best to take care of her, her father (Henry), and their home. Emily just wants a permanent home. She wants to be settled in one place. Her father has kept their family moving her whole life (gold fever and wanderlust) and Emily has no desire to move again. Emily hides her figure under bulky, manly clothes (it would not due to look to feminine in this area). So far Henry has not uncovered any gold on his claim (the area has been played out, but he does not believe it). They only thing he keeps bringing up are pretty blue pebbles.

One day Caeden Thibault comes to town. Caeden is a geologist with the government (and running away from his own past and pain). Henry meets Caeden in town and invites him to camp out on their property (Henry is very friendly and generous). Emily is shocked when Caeden comes into their home while she is getting out of the bath. This is the beginning of a tumultuous romance. Can these make it work? What happens when Emily shows Caeden the blue pebbles? You will need to read A Treasure Concealed to find out.

A Treasure Concealed is an entertaining Christian, romance novel. A Treasure Concealed is well-written. Tracie Peterson did a wonderful job in describing gold mining life in Montana. I could picture the town, the people, the Carver's home, and the difficulties these people faced. It has the normal romance elements, but it had something special. The novel focuses on people regaining their faith, that we have a loving God, and leaving a problem in God's hands (instead of worrying and fretting over an issue). A Treasure Concealed has a lovely ending. I give A Treasure Concealed 4 out of 5 stars (which means I liked it). I will definitely be reading the next book in the Sapphire Brides series.

I received a complimentary copy of A Treasure Concealed from NetGalley in exchange for an honest evaluation of the book.