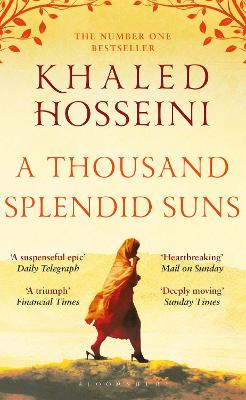 Mariam is only fifteen when she is sent to Kabul to marry the troubled and bitter Rasheed, who is thirty years her senior. Nearly two decades later, in a climate of growing unrest, tragedy strikes fifteen-year-old Laila, who must leave her home and join Mariam's unhappy household. Laila and Mariam are to find consolation in each other, their friendship to grow as deep as the bond between sisters, as strong as the ties between mother and daughter. With the passing of time comes Taliban rule over Afghanistan, the streets of ... Read More

Mariam is only fifteen when she is sent to Kabul to marry the troubled and bitter Rasheed, who is thirty years her senior. Nearly two decades later, in a climate of growing unrest, tragedy strikes fifteen-year-old Laila, who must leave her home and join Mariam's unhappy household. Laila and Mariam are to find consolation in each other, their friendship to grow as deep as the bond between sisters, as strong as the ties between mother and daughter. With the passing of time comes Taliban rule over Afghanistan, the streets of Kabul loud with the sound of gunfire and bombs, life a desperate struggle against starvation, brutality and fear, the women's endurance tested beyond their worst imaginings. Yet love can move a person to act in unexpected ways, lead them to overcome the most daunting obstacles with a startling heroism. In the end it is love that triumphs over death and destruction. "A Thousand Splendid Suns" is an unforgettable portrait of a wounded country and a deeply moving story of family and friendship. It is a beautiful, heart-wrenching story of an unforgiving time, an unlikely bond and an indestructible love. Read Less

All Editions of A Thousand Splendid Suns

And the Mountains Echoed

Excellent literary piece from one of the best authors of this generation. This book is every bit as good, if not better, than his previous work, The Kite Runner. A Thousand Splendid Suns is at turns charming, insightful, tragic, and triumphant, Hosseini brings us to a world that is unfamiliar to most Westerners. It really makes you feel for the plight of Afghani women. I am usually a fan of techno-thrillers and spy novels, but I have absolutely devoured Hosseini's novels. Highly recommended

This is not only a well written book, but a good historical account of Afghanistan during the last 40 years.
The characters are well developed and very credible.

I give it five stars! it is compelling, and a great read.

Excellent book to read. Could not put it down until I finished it. Heart-warming, heart-breaking, insightful, and very sensitively well written.

In her miserable, short life, Nana had her glorious moment. When she was fifteen years old, she had almost married to a young parakeet seller. Even many years later, when she mentioned this episode to Mariam, her daughter could tell by the wistful light in Nana?s eyes that she once had been happy. Here we almost could picture a fifteen-year-old girl with youthful thinking and dreams, tried her wedding dress on in the mirror secretly. Like most little girls, she must have dreamed of the fairy-tale wedding with a beautiful dress, sunny weather, in a holy location surrounded by the flowers and the people. But the tragic turn from her great hope to destructive hopelessness happened within seconds. One week before the wedding date, Nana collapsed suddenly because of epilepsy. Her finance?s family thought that she had been possessed by some evil, they called off the wedding, and the wedding dress was stashed away. Since then, Nana had never been genuinely happy.


Another tragedy hit soon, she was raped by her master Jalil---a rich man who already had three wives. (In his account of this story, Nana forces herself on him). She got pregnant, and Jalil didn?t want to stand up to his family and accept responsibilities for what he had done. At that time in that faraway country, it is an honorable thing for a father to kill his own daughter if she lost her virginity before the marriage---either on her own or by force. But Nana?s father didn?t have the heart to do it, disgraced, he packed things and left for good.

Behind closed door, a face-saving deal had quickly struck. Nana was sent off to an isolated house, detached and far away from the outside world. Mariam was born in this removed place. Nana?s feeling towards Mariam must be very complicated. Mariam was a living evidence of her humiliation, and she kept reminding her of all she had suffered. But certainly Nana loved Mariam, ---she was all she got now--- however, the cruel reality had embittered Nana. Being ripped out and tossed aside like the weeds, she was filled with a deep and burning bitterness that was so all consuming that it left no room for anything else. She could hardly be called as a good mother. She called her baby daughter harami, kept telling her that she would never have legitimate claim to the things other people had, things such as love, family, home, acceptance. For little Mariam, Jalil was the only one who made her feel needed and cherished. His once-a-week visit had brought sunlight to her grey, lonely world. Nana was fuel with jealous and new hatred---the same man who had ruined her life was going to take away her daughter?s love and tenderness now. At the same time, she also felt worried about her daughter because she knew that Mariam?s love towards her father could only bring more hurts and pains into her life. The harsh reality had taught Nana, the more you expected, and the deeper you are doomed to fall. But she could not make Mariam understand.

Then one day, when Mariam was 15 years old, she left their home for her father with wishful hoping of being introduced to his family. It was the last straw. Nana killed herself.

It?s the story about Nana, the story told in ?A thousand splendid suns?. Nana is not an important character in this book---in fact, the author kills her conveniently even before the real story begins. Her whole tragic life hasn?t lasted over chapter 5. She is not a pleasant character either. The way she treated her own daughter and herself is cruel and terrible. However, after I read the whole story, I still can?t help but thinking of her. Like a stubborn ghost, she is haunting me from the beginning to the end and refuses to leave.

Khaeld Hosseini is a fantastic storyteller. I was enchanted by the scenarios he weaved and very anxious about the final end of the story. He is also a great reality recorder. He mirrored the real life of Afghanistan mixed with war, chauvinism, Puritanism and the people?s pursuit of love and freedom. This book opened a window to another world for me. In Afghanistan you are forced to wear the globe and mask; you are forced to marry a man you never know and who may have wives already; you are not allowed to accept education and to work if you are female; you are forbidden to talk to another man if you husband isn?t with you; No sing, no dance, leave alone bar drinking?? Apart from the misery of spiritual control, war also brings about many casualties to this poor country.

However no matter how different their life might be, their feelings towards the life are similar to us. The cheer joys that love, acceptance and friendships can offer; the sharp pains of rejection and betray can bring; and the worries over the unknowing future-----those feelings you could feel any where, any time, no matter which corner of the world you are located now. Nana?s story tells me that life might be very tough, but if you choose to live in this world, you should never be blinded by hatred and bitterness. The past might crawl itself out every now and then, but you could never let it run over you. Either you stand up to fight, or accept the reality and learn to move on.

As USA Today stated in their review the Story "makes our hearts ache, our stomachs clench, and our emotions reel". If you enjoyed his first book, you will certainly enjoy this book, The author lived is Afghanistan as this makes the story more interisting since he has been there, done that. I feel it is a good time to read this book with the unrest or war is going on at this time.