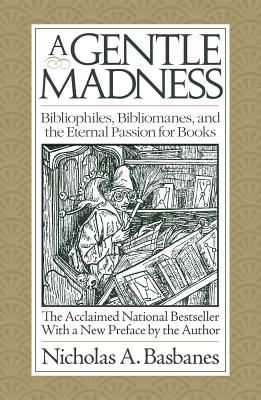 A Gentle Madness: Bibliophiles, Bibliomanes, and the Eternal Passion for Books

Richly anecdotal and fully documented, "A Gentle Madness" is a celebration of books and the people who have revered, gathered, and preserved them over the centuries. of photos. Read More

Richly anecdotal and fully documented, "A Gentle Madness" is a celebration of books and the people who have revered, gathered, and preserved them over the centuries. of photos. Read Less

Revised with a New Preface by edition

All Editions of A Gentle Madness: Bibliophiles, Bibliomanes, and the Eternal Passion for Books

Books by Nicholas A Basbanes

Every Book Its Reader: The Power of the Printed Word to Stir the World

Among the Gently Mad: Strategies and Perspectives for the Book Hunter in the 21st Century

A Splendor of Letters: The Permanence of Books in an Impermanent World

A Gentle Madness: Bibliophiles, Bibliomanes, and the Eternal Passion for Books

Among the Gently Mad: Strategies and Perspectives for the Book Hunter in the 21st Century

A Passion For Books

Reading Nicholas Basbanes' lengthy and meandering work, "A Gentle Madness: Bibliophiles, Bibliomanes, and the Eternal Passion for Books" is much like one of the activities the book celebrates: browsing slowly through a large, packed used book store or a large library and becoming both enthused and overwhelmed. Basbanes' celebrates books, reading, and collecting and their eternal appeal. First published in 1995 by a different publisher, Fine Books Press reissued the book in 2012 with a new preface by the author that updates the reader on some of the individuals discussed in the text. Basbanes has written widely on book collecting. "A Gentle Madness" was his first and most successful book.

Basbanes examines the passion to collect books over the ages beginning no later than the ancient Greeks. He explores the reasons that have impelled individuals to collect books, sometimes at the expense of their health, friends or lovers, finances or sanity. Basbanes explores the kinds of books collectors seek and, most of all he explores the characters of the people who have made the collection of books their passion.

The book is divided into two large parts. The first part offers some broad thoughts on the nature of book collecting together with a history of book mania from the ancient world through the invention of the printing press, through Britain and early America. This part of the chronicle ends at about the mid-twentieth century. The second and longer part of the book discusses book collection through roughly the end of the twentieth century. Both parts of the book introduce fascinating characters, most of whom will be unfamiliar to readers who are not themselves avid and informed collectors.

The book both begins and ends with a consideration of a celebrated criminal case involving a man named Stephen Blumberg. In 1991, Blumberg was tried in Federal court for a long series of thefts from university libraries coast to coast. In his defense, Blumberg did not deny the thefts but instead offered an unsuccessful plea of insanity. According to Basbanes, a mobster approached Blumberg at one stage of pretrial proceedings and asked him why he used his obviously considerable criminal talents to steal books rather than "more liquid" items such as gold or diamonds. Blumberg replied to the astounded mafioso: "I never took the books to sell. The idea was to keep them." Blumberg's guilty passion for books was not motivated by the desire to get rich.

If not criminal, the passion for the books of the many remaining collectors in Basbanes' study is at least equally as strong as was Blumberg's. This book does not deal with small-scale, moderate collectors whose activities might themselves be worthy of study. Most of the people Basbanes describes are highly wealthy, through inheritance or through their own efforts, and spend, as the time comes closer to our own, increasingly large sums on books. Basbanes' tells of a world of expensive auction houses, buying agents, rare collections, and seemingly exorbitant prices. At times books and what they contain might seem to be slighted in this story of aggressive buying, selling, and collecting.

Basbanes' collectors seek early illuminated Bibles, folios of Shakespeare, first editions of Don Quixote, rare letters and manuscripts, obscure printings of early works by Edgar Allen Poe, and similar materials. There is also an emphasis on complete holdings of, say, American first editions, (or American books in general), or of works of a particular author ranging from William Faulkner to Charles Bukowski. Some of the best parts of this book describe a young man just out of college who dedicated his life to the preservation of the vast and largely untranslated literature in Yiddish from destruction. Other inspiring sections tell of two African Americans who devoted their lives to the collection and preservation of African American writings and artifacts from the United States and elsewhere in the Western hemisphere.

In some of this collecting mania, there seems to be a sense of acquisitiveness and competitiveness which overshadows the joys of reading. But for the most part Basbanes shows great sympathy for his collectors. For Basbanes, almost all of the individuals with a mania for book collection acted through their sense that the collective wisdom of human beings is found in the written word. Books contain what is lasting in life rather than what is passing or ephemeral. Collectors passed their collections to libraries in many instances or, when the collections were sold or dispersed, made books widely available to others.

In understanding books and the urge to collect, Basbanes quotes the 20th Century German author Walter Benjamin: "I am not exaggerating when I way that to a true collector the acquisition of an old book is a rebirth. This is the childlike element which in a collector mingles with the element of old age." Basbanes continues in his own words:

"[T]he closer people get to the source, the closer people feel to the wonders of creativity. Storytellers, philosophers, scientists, adventurers, artists, economists, politicians, diplomats, theologians, even evil despots ...articulate their thoughts between hard covers. To see and handle a first edition of Darwin's Origin of Species or Newton's Principia Mathematica is to touch ideas that change the way people live."

Discussions of books and collecting always remind me of one of my favorite authors, the reclusive late Victorian novelist George Gissing. Although Basbanes does not discuss Gissing, many of his titles are rare and prized by collectors. In his last novel, "The Private Life of Henry Ryecroft" (1903), Gissing has his title character, an aging author named Ryecroft, describe in many passages the love for reading and for books. At one point, Ryecroft says:

"I know men who say they had as lief read any book in a library copy as in one from their own shelf. To me that is unintelligible. For one thing, I know every book of mine by its scent, and I have but to put my nose between the pages to be reminded of all sorts of things. My Gibbon, for example, my well-bound eight-volume Milman edition, which I have read and read and read again for more than thirty years -- never do I open it but the scent of the noble page restores to me all the exultant happiness of that moment when I received it as a prize. Or my Shakespeare, the great Cambridge Shakespeare -- it has an odour which carries me yet further back in life; for these volumes belonged to my father, and before I was old enough to read them with understanding, it was often permitted me, as a treat, to take down one of them from the bookcase, and reverently to turn the leaves. The volumes smell exactly as they did in that old time, and what a strange tenderness comes upon me when I hold one of them in hand. For that reason I do not often read Shakespeare in this edition. My eyes being good as ever, I take the Globe volume, which I bought in days when such a purchase was something more than an extravagance; wherefore I regard the book with that peculiar affection which results from sacrifice."

I have a considerable, disorganized collection of books, none of which are likely to be rare, that I have accumulated over the years. Basbanes' "A Gentle Madness" moved and fascinated me but it did not make me yearn to be a collector in the manner described in the book. Rather, the book reminded me of the joy of reading and study. It made me cherish the time I have spent in the past and hope to spend in the future with books.