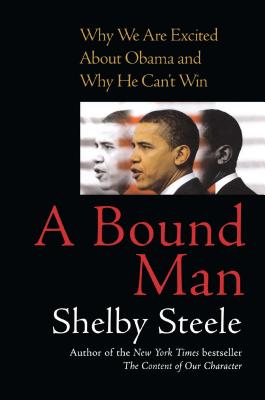 A Bound Man: Why We Are Excited about Obama and Why He Can't Win

All Editions of A Bound Man: Why We Are Excited about Obama and Why He Can't Win

White Guilt: How Blacks and Whites Together Destroyed the Promise of the Civil Rights Era

Shame: How America's Past Sins Have Polarized Our Country

A Dream Deferred: The Second Betrayal of Black Freedom in America

The Content of Our Character: A New Vision of Race in America

The Audacity of Hope: Thoughts on Reclaiming the American Dream

The Audacity of Deceit: Barack Obama's War on American Values

White Guilt: How Blacks and Whites Together Destroyed the Promise of the Civil Rights Era

Dreams From My Father: A Story Of Race And Inheritance

A Dream Deferred: The Second Betrayal of Black Freedom in America

Would you be a bargainer or a challenger?

Shelby Steele outlines a comparison between two types of social masks for African Americans; the ?bargainer? and the ?challenger.? It appears that the main thesis of this book is the fact that Barak Obama can not win the presidential race because he is a ?bargainer? type. He seeks to ease the guilt of white America he will minimize his ability to gain the black vote because most will not entirely trust him has a representative of the people. The author proceeds to list several examples of ?bargainers? such as Ophrah Winfrey, Bill Cosby, and Louis Armstrong. The idea is that the African American can not win choosing either bargain or challenge chip. If he or she is a bargainer then that person fits into mainstream America but does not gain the effectiveness necessary to create social change. This is not a problem for the entertainment industry but it can be deadly for politics. The author also describes the challenger position as a person that uses racial guilt to their advantage. This person is not accepted by mainstream but gains all the trust and confidence of minorities. Examples are Al Sharpton and Jesse Jackson. The only power they hold relates to imposing white racial guilt. Finally, an effective African American that can create change would operate in the world as an individual refusing both masks. He or she will instead place responsibility on the African American community. He or she has a desire to work hard and earn a place in the world over use of racial pressures.

Over all I give this book a 3 out of 5 stars not for the fact that I agree with all the ideas and opinions in the book but because it asks new fundamental questions that allow African Americans the ability to move forward. It lays out an opportunity for the US to move pass race entirely. I feel that most of his argument is not supported by solid facts. Each example of bargainer has also publically acted in the position of challenger. I was also looking for active examples of the no mask alternative. I feel that there are many examples out there such as former Maryland Lt. Governor Steele. The problem with most examples is the fact that a person is still denied high levels of success. So if we look at Obama how can he achieve his success if neither mask is worn? The author fails to recognize the fact that we often have to get in the door before we can effect any change. Here is another book that states the problem but fails to outline a solution.

GREAT BOOK!! I learned more with this book and the "Dreams From My Father"!

These of ALL the OBAMA books rate at the TOP for me thus far!!

Do yourself a favor: READ IT!!

While I do find several of Steele's points intriguing, I also found some of the ideas to be somewhat off base. He introduces the fact that Obama faces challenges that no other presidential candidate has ever faced, and that he must find a way to prioritize and balance these challenges with the best interests of an entire country in mind. I believe some of the points he makes about these challenges will be difficult to handle. However, Steele doesn't give Obama (or the American people, for that matter) much credit when it comes to the ability to do so. In the end, it seems as though Steele is more against the idea of a black president because of a lack of faith in Obama's ability to effectively challenge stereotypes, or the American public's ability to move beyond age-old race issues.