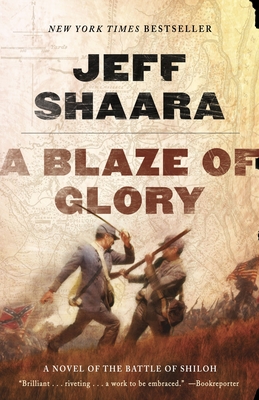 A Blaze of Glory: A Novel of the Battle of Shiloh

In the first novel of a spellbinding new trilogy, "New York Times"-bestselling author Shaara returns to the Civil War terrain he knows best into an action-packed Western Theater for a vivid re-creation of one of the war's bloodiest and most iconic engagements--the Battle of Shiloh. Read More

In the first novel of a spellbinding new trilogy, "New York Times"-bestselling author Shaara returns to the Civil War terrain he knows best into an action-packed Western Theater for a vivid re-creation of one of the war's bloodiest and most iconic engagements--the Battle of Shiloh. Read Less

All Editions of A Blaze of Glory: A Novel of the Battle of Shiloh

To Wake the Giant: A Novel of Pearl Harbor

No Less Than Victory: A Novel of World War II

To the Last Man: A Novel of the First World War

The Killer Angels: The Classic Novel of the Civil War

The Fateful Lightning: A Novel of the Civil War

The Smoke at Dawn: A Novel of the Civil War

A good, not great start, to the war in the 'West.' Very slow moving, however, if you have read Jeff's other books, you know he can be a bit, 'long winded.' The first half is tought to get through, however, once the battle starts moving, so does his writing. I learned something about Shiloh.

I read Jeff Shaara's novel about the Siege of Vicksburg, "A Chain of Thunder" and then worked back to Shaara's novel "A Blaze of Glory", a historical novel of the Battle of Shiloh. The two books form part of a projected trilogy of historical novels of the Civil War in the West. The third volume, will cover the War in Georgia and the Carolina's, including Sherman's March to the Sea.

Fought April 6-7, 1862 on the banks of the Tennessee River about 20 miles north of Corinth, Mississippi, the Battle of Shiloh was a pivotal conflict of the war. The Confederates launched a daring surprise attack against a Union Army encamped but without entrenchments at Pittsburgh Landing, Tennessee. The attack seemed to come close to success on the first day of hard fighting but the Confederate Army was pushed back to its base at Corinth on the second day. The Confederates launched the attack to try to recover previous severe reverses in Tennessee and Kentucky.

The battle presents a good subject for a historical novel with hard fighting, heroism, and many tantalizing possibilities. In a short introduction to the reader, Shaara describes the difference between historical accounts of a battle and historical fiction. A history is limited to the evidence at hand and focuses on information and on external events, such as troop movements. A novel explores character and motivation, by imagining conversations, reflections, and actions of the characters that help bring understanding to events. Shaara writes: "the points of view of the characters in this story are more appealing than the blow-by-blow facts and figures that are the necessary products of history textbooks. For that reason, I try to find those specific characters who pull me into the story, whose actions affect the history of the event, and whose own points of view will, I hope, bring that story to you in a way you find more intriguing and more personal than what you might have read in high school."

For Shaara, the character interest in this story centers in the figure of the Confederate commander, Albert Sidney Johnston, who has, for many, become a legend. A highly regarded and charismatic figure, Johnston had been severely criticized for the Confederate reverses at Forts Donelson and Henry, with many in the South calling for his ouster. He sought to redeem himself at Shiloh. In the middle of the first day's fight at Shiloh, April 6, Johnston was killed while in the front of the battle, seeking to encourage reluctant troops to extend the Confederate line against Union defenders. He became, and remains, the highest ranking American general to die in combat. Shaara offers a thoughtful portrayal of Johnston as a man and as a commander in ways that would not always be discussed in a standard history. His account of Johnston's death, for example, is moving and appropriate for a figure of heroic stature.

Johnston dominates this novel of Shiloh. Shaara also offers portrayals of the leaders on both sides, including U.S. Grant and Sherman for the Union and P.T. Beauregard, Braxton Bragg, and Nathan Forrest for the Confederacy. Beauregard was Johnston's second in command and became the commander upon Johnston's battlefield death. Shaara also introduces fictitious characters to represent the troops on the line. For example, he creates the character of Thomas Bauer from Wisconsin, a young man who receives his first exposure to combat at this horrific battle. Bauer also plays a prominent role in Shaara's subsequent Vicksburg novel. Each chapter in the book is presented from the perspective of one of the major characters, from the Union or Confederacy.

The book is long and flags in places. It is most effective in its depictions of Johnston and in the sections that are most novelistic. These scenes tend to involve small groups of characters when they discuss proposed actions and their thoughts about them. Shaara also works to get inside the minds of individual characters. Shaara also captures the confusion, undisciplined, and hard-fought actions of the battle. Most of the account centers, as it should, on the April 6 combat while the successful Union counterattack on April 7 gets a much briefer treatment. The battle scenes would have benefitted from tighter, more succinct writing.

The combat and battle plan at Shiloh was difficult and remains controversial. Shaara offers a lucid approach to the battle and to the Confederate Army's strategy and tactics in the fight. Shaara follows the standard historical approach to the battle by emphasizing the Union stand at the center of the field at the Hornet's Nest under troops commanded by General Benjamin Prentiss. Many modern students of the battle argue that the significance of the Hornet's Nest has been overemphasized at the expense of action at other parts of the field.

Students of the battle have reached varying conclusions on the impact of Johnston's death. Beauregard called off the offensive late in the afternoon of August 6. His decision has been questioned by many with the implication that Johnston might have pressed the attack to a successful conclusion and won the day. Shaara's account shows some sympathy with this view, together with a great deal of sympathy for Johnston over Beauregard. Many students of the battle have supported Beauregard's decision to halt the fighting on April 6.

Shaara's novel will serve as a good introduction to Shiloh for readers who do not want to be bogged down in complex military histories. He tells a good story well. Readers with a serious interest in Shiloh will have an enhanced understanding after revisiting the battle in Shaara's novel.

Are you a Civil War buff? If so, you'll really enjoy Jeff's story of Shiloh.